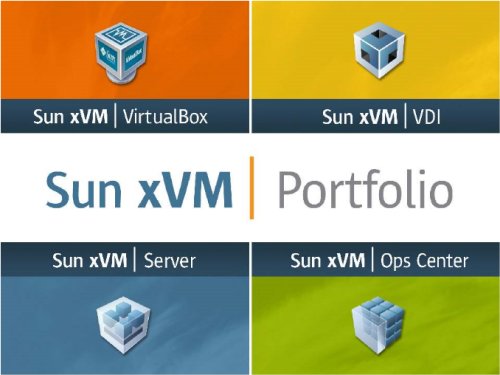 VirtualBox is x86 virtualization software installed on an existing host operating system such as Solaris, Windows, Linux or Mac OS X; it allows running additional operating systems, each known as a "Guest OS", each with its own virtual environment.

VirtualBox inside the xVM product line is intended to be the starting point for developers to create and test their virtual machines before deploying them on the xVM Server environment, allowing them to be created on any of the supported "Host OSes".

Since version 1.6.0, VirtualBox can run under the constrains of a Solaris Container, expanding the number of operating systems that can be run inside each Container and manage the resources from each OS individually through the Container.

Sun VDI (Virtual Desktop Infrastructure) software is a connection broker that provides desktop virtualization to replace fully featured machines with virtual images on a server that are controlled remotely on a thin client such as Sun's Sun Ray, or any other computer with Java.

Sun VDI supports lifecycle management and the ability to monitor resource usage and dynamically turn them off for each assigned virtual machine (guest OSes).

The xVM Server is a bare-metal hypervisor based on the open source Xen under a Solaris environment on x86-64 systems. On SPARC systems, xVM is based on Sun's Logical Domains and Solaris. Sun plans to support Microsoft Windows (on x86-64 systems only), Linux, and Solaris as guest operating systems.

Instead of having its own disk image format, Sun xVM Server will import/export VMDK and VHD images to facilitate interoperation with VMware ESX Server and Microsoft's Hyper-V.

The Sun xVM Ops Center is a datacenter automation tool that simplifies discovery and management of physical and virtualized assets. Among its features it can:

The upcoming release includes a browser-based, platform-independent interface that uses AJAX for its rich interactivity.