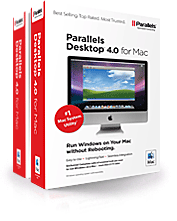 I don't own a Mac (yet), but it looks like the latest release of Parallels virtualization software, Parallels Desktop 4 for Mac, caused quite an excitement among the fans. I thought I'd share the links with you.

END_OF_DOCUMENT_TOKEN_TO_BE_REPLACED

Parallels Server is the first virtualization solution designed to run on Apple hardware, including Mac Pros and Xserves, and the first to run multiple copies of Mac OS X Server v10.5 Leopard on a single Apple computer. Parallels Server also runs on any x86 or 64-bit Windows or Linux-based server.

Parallels Server can be installed using the Parallels lightweight hypervisor, in which virtual machines run in tandem with a primary operating system, or 'bare metal', in which virtual machines run independently and are not dependent on a host operating system to function properly. At installation, users can choose to load Parallels Server in either the lightweight hypervisor mode or bare-metal mode. Parallels Server is the only virtualization product of any kind to afford users the flexibility to choose their implementation during installation.